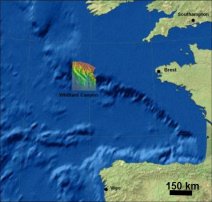 With the ever-increasing pressure on our Deep Oceans, there is a rising and urgent need for the quantification of deep-sea biodiversity:

However, assessing biodiversity in the Deep Ocean is a major challenge:

CodeMAP searches for alternative methods to quantify deep-sea biodiversity. The aims are

CODEMAP focuses at first on submarine canyons, but the techniques will be transferable to other deep-sea environments, for example, cold-water coral reefs or mid-ocean ridges.

The research will be organised around four themes: